How do you make a card for someone you don’t know?

I’m glad you’re back. This time I was faced with the challenge of making a card for someone I haven’t met. When I enrolled as a Stampin’ Up demonstrator, I also signed up for the birthday list. All teammembers are free to sign up to make a birthday card for everyone who has signed up too. So now the first birthday was coming up and I know nothing about her except her name and the fact that she is a Stampin’ Up demonstrator too. I don’t know how old she is, what she likes or dislikes, her favourite colour or animal. No idea. So what theme do you give a card in such a case? Well, I used my new stamp set Letters for You. I chose this as one of two free stamp sets because I singed up during Sale-a-bration. It is the most expensive set in the cataloque but the font is beautiful! It isn’t just grreat on cards but because of it’s size, it is perfectly suited for use in my scrapbook albums too. I can see a great many possibilities with this set, how about you? 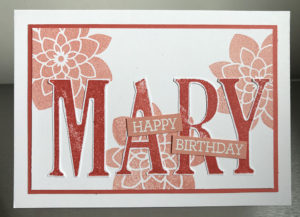 This is what the card looks like. It is a combination of the Letters for You and the Crazy about You stamp sets. The latter has unfortunately been retired but it did make a cute combination with the other. The base of the card is half of an A4 sheet of Whisper White cardstock which I scored and folded in half. The top pannel is also a piece of Whisper White cardstock. The mat that breaks up the two white layers is a piece of Calypso Coral cardstock. I used the same colour to stamp the letters of the name. The flowers in the background and the strips of paper onto which I stamped HAPPY BIRTHDAY are in the colour Crisp Cantaloure (which was one of the in-colors of 2013-2015). I used VersaMark to stamp the words HAPPY and BIRTHDAY onto the strips and covered them with ewhite embossing powder, which I melted. I hope Mary likes this card as much as I do. Hopefully I will be able to send the next person a 100% current Stampin’ Up card, eventhough it was fun to use an older set. Some stamps remain fun and the Crazy about You set has such versatile, neutral words combined with simple graphic flowers, they will remain pretty.

What is a timeless stamp set you own? I would love to read about it in the comments below.