At last the day had come: the Team Day. I wasn’t sure what to expect, but going by the messages on Facebook and Whatsapp, this was going to be the best day ever. A little before 10 am I nervously walked towards the front door of playground association Kabouterdorp (gnome village) in Veldhoven. I decided to enter with a spontanious ‘Hello, I’m Leonie, I’m new’ instead of quietly waiting in the corner. It worked. Everyone came up to me to introduce themselves and when I recognised a name, I would let them know. At precisely 10 o’clock we were allowed to enter the hall. There wer four groups of tables with workspaces and water. Along the sides of the room there were display tables full of inspiration. They showcased the most beautiful examples of cards, gifts, paintings and 3d-projects. I took so many photo’s. There is such talent among the team members. The main theme was: Heel Holland stempelt. This roughly translates to The Dutch Stamp Off as it is a parody of the tv show Heel Holland Bakt which is derived from the BBC’s The Great British Bake Off. In any case, there were chefs hats hanging above the bar and everyone had a sign at their workplace decorated with an apron. There were also centerpieces on each of the tables composed of flowers and plants in old cakemoulds. It was promising to be a great day… 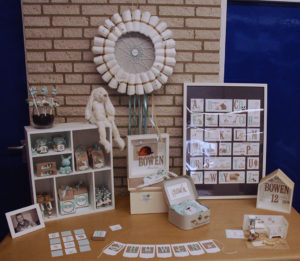 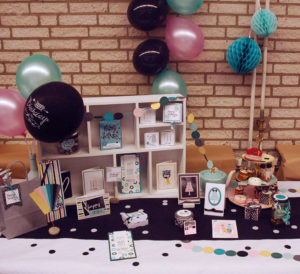 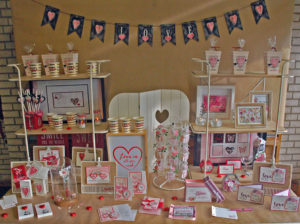 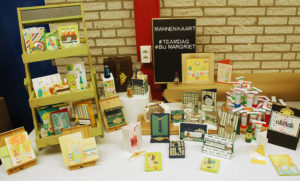 *photo’s of the inspriration tables were taken by Susanne Thijssen.

This was also the time to start swapping our own creations. A swap is when you make something and you swap it with someone else for whatever it was that they made. In this case, we got some guidelines from our up-line, Margriet. It had to be 14,8 x 14,8 cm and were to incluede the colours Crumb Cake, Night of Navy, Tranquil Tide and Chocolate Chip supplemented by white and black. The number of colours used was not important. Furthermore, you had to incorporate your name, adres, postcode, city, birthdate and blog and put an inspiring quote on the back. Obviously we had to use Stampin’ Up products. We had to take into account that the pages were going to be bound together and to do that we would make holes in the top left corners of our pages. What we would end up with was an address book with all our team member’s information in it. Super fun, but where do you begin? 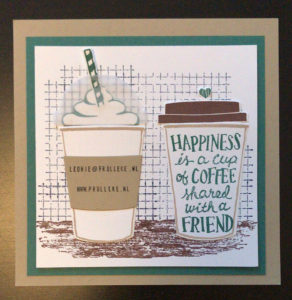 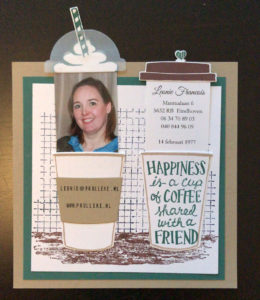 The masculine colourcombination we were given, initially make me think of the In The City Hostess set, but then I decided that the buildings were too small. Next I was drawn to the Bike Ride set. I could make a play on words with cycling by or something like that. (Obviously we have a lot of bike sayings in Dutch that don’t translate well, but are a good play on words.) However this didn’t make the cut either. I ended up chosing Coffee Cafe. And because I wanted to make a good first impression, I didn’t want it to be to simple, so I went for an interactive page. This way my picture and address wouldn’t be right in your face as you flipped through the pages of the book. I made it so that if you pulled the lids of the coffee cups up, my address and photo would be revealed. After a fair amount of stamping and die cutting, the end was in sight. My MISTI has never seen as much love as when I was making the 36 pages for this swap. And without the help of my dear sweet friends, from the previous blogpost, I wouldn’t even have been able to make it. One lent me her Tranquil Tide ink pad and the other her Timeless Textures stamp set. 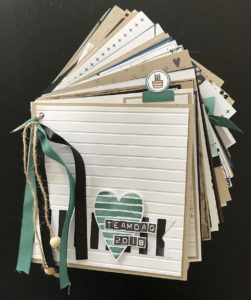 The swaps were well received. It was fun to see hou much variety there was in the different pages considering we started with the same parameters. Creativity without limits. Then it was time we got to work. We decorated chefs hats with our names, made a mini album as a tutorial by special guest Janneke de Jong and we made a few extra pages for our address books as a workshop by our teamleader. In between all the crafting we had a comprehensive lunch consisting of all sorts of dishes we each made and brought with us. Around quarter to six the day was over. It was indeed the best day ever.

I am so happy to have ended up in such a great team and I look forward to attending many more of these fun events together.