The power of a card

Long ago, or so it seems, in reality it was only a few weeks ago, we were on holiday in Turkey. My oldest two children were besotted with the animation team that would entertain them at the Kids Club. As parents, we also had a good feeling about the care takers that kept our kids busy with a variety of activities. That’s why I decided to make a card for them. I had taken some craft supplies with me and I know how nice it is to get a token of appreciation. 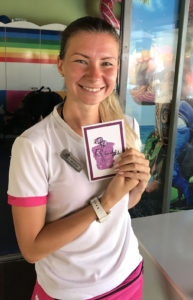 On our last day, I gave the Mini Club Chef the envelope. My husband noticed that she didn’t open it and said that she probably thinks that it contains money. I decided to clear that up straight away and told her: “It’s not money, it’s a card.”. She was excited and replied “that’s even better.”. It surprised me too. But she did go on to open the envelope immediately. As soon as she saw the front of the card her eyes filled with tears.

She gave me a big hug. Of course we could have given her some Lira’s, but this made more of an impression. On the inside I had written a simple thank you for the fun activities they had organised and how much our childrend enjoyed their time there. I had my daughter write her and her brothers name.

It was great to see how something as basic as a card can have such an impact. Besides now the team can look at it from time to time or even get some encouragement from it if they are having a rough day. That is the power of a card. It is an easy wat to let someone know how much you enjoy what they do for you and that you appreciate how they do it. 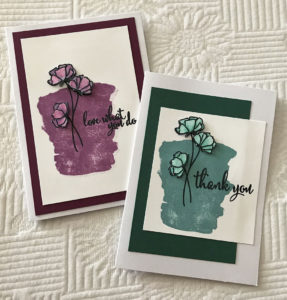 Our childredn had a super fun holiday partly because of the efforts of these speceial staff members. Surely that is worth a card.

Who do you think deserves a card? Let me know in the comment section below. I look forward to reading your opiions.

Independant Stampin’ Up! demonstrator in Eindhoven and surrounding area

Thinking of You Card

A taste of the card buffet